The T2 exhibition center at AICM is located at the exit level, opposite luggage check hall L1, and is open to the public 24 hours a day year-round.

Images from the National Photo Library “land” at the AICM

About 60 images showing the changes in Mexican society from 1845 to 1960, from the “romantic” portraits and perfect framing of the nineteenth century, to the daring angles that recall the modern Mexico of the mid-twentieth century, make up the exhibit Photographic Memory of Mexico, presented at the Terminal 2 Exhibition Center of Mexico City International Airport (AICM).

To commemorate the 40-year life of the National Photo Library, which began its work by delivering the Casasola Archive to the National Institute of Anthropology and History (INAH) on November 20, 1976 on the anniversary of the Mexican Revolution, this sample has a “stopover” at the airport after showing at the Open Gallery at Rejas de Chapultepec.

It is organized into themes: Archaeology, Architecture, Landscape, Daily Life, Portrait, Revolution, and Variation; the public will find 58 black and white images of significant social, political, cultural, and artistic events in Mexico, as well as ways of daily life, the evolution of the landscape, urban development, and the gradual transformation of the identity of its inhabitants. The images come from 20 of the 46 vaults that make up the National Photo Library.

The public at AICM will appreciate the Hall of Monoliths from the Antiguo Museo Nacional, the Pyramid of the Sun at Teotihuacan, the interior of the Metropolitan Cathedral, a view of the city of Guanajuato, the inscrutable folds of Mil Cumbres, and the lava blaze rising from Paricutín (both in Michoacan), or “frozen” waterfall of San Miguel Regla (Tlaxcala).

The exhibit, organized by the Ministry of Culture and the National Institute of Anthropology and History (INAH), also feature anonymous people and celebrities, such as Tin Tan or artists Diego Rivera and Tina Modotti; characters from the Revolution like federal solider women and warlords; street workers, children takin their first steps ballroom dancing, women observing a partial eclipse of the moon, and test flights in the fields of Balbuena. All are snapshots that have survived to speak about us.

The authors of the images-of the more than two thousand represented in the vaults of the National Photo Library- are some of the photojournalists who were part of the Casasola Agency, and photographers like Manuel Ramos, Hugo Brehme, Tina Modotti, Nacho López, Guillermo Kahlo, Charles B. Waite, Winfield Scott, Aurelio Escobar, Semo (Simon Flechine), and Vicente Luengas.

Juan Carlos Valdez, director of the National System of Photo Libraries, said “there are those who call the Photo Library just a reservoir of photographs, which is the definition, but we see it as a space for interaction between collections and the viewer. We serve the user, which commits us to letting people see and understand that photography is a collective heritage, a society’s memory.

“To the extent that we, as an institution, are able to protect the images correctly, to preserve them as they should be, to document them efficiently, and to disseminate them through any medium, whether through the Internet, at exhibits, or museums, we help photography to be not only known but respected. The National Photo Library is the most important international public photo library”.

That place that photography has gained as a historical document is clear in the showing of the Photographic Memory of Mexico. “I was not easy to show the visual richness that the National Photo Library has in this exhibition. All of the images it in possess documentary or aesthetic value, and some have both.

“The exhibition gives an overview of the universe of images of our heritage, consisting of little more than 900 thousand pieces, of which not even 10 percent is known, because there are clichés, images that are in continual use by those who look to photography for a mere illustration. We try to raise awareness among the public and professionals, that photography is a primary source for research”.

Since its arrival 40 years ago at the Convent of San Francisco, in Hidalgo, the National Photo Library has also encouraged the professionalization of photographic conservation, fueled criticism around these issues, and created an image-literate public. And it has gone further: in partnership with the Hidalgo State Council for Culture and Arts, it has promoted photographers’ training through the PhotoEnsayo program. 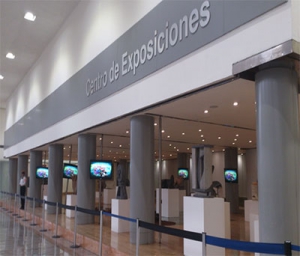 The Exhibition Center of the airport terminal 1 (T1) is located in room C of the national area, between gates 4 and 5. It is open to the public 24 hours a day throughout the year.

In this space, exhibitions on diverse topics connected with aviation and its development in Mexico are constantly exhibited; as well as expositions related to the Mexican flora, fauna and ecosystems; artistic and cultural performances of renowned artists and other exhibitions that contribute to the spreading of the cultural and tourist richness of Mexico. Also, in the later part, busts of several important persons that significantly contributed to the development of aviation in Mexico are exhibited.

Additionally, we invite you to visit the mural entitled THE CONQUEST OF AIR BY THE MANKIND, which is housed in room B of the ambulatory, in the national area. This mural was created by architect Juan O’Gorman and represents a journey through the history of humanity and its struggle to break all limits, symbolizing the beginning of aviation and its evolution until modern times. 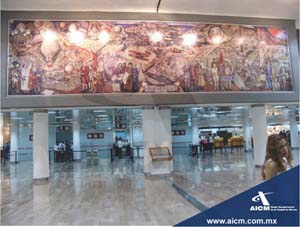